Shortly after the launch of Windows 10 on July 29th, Dr Scott Hollier put together his thoughts, findings and hands-on impressions regarding the accessibility of Microsoft's latest operating system. 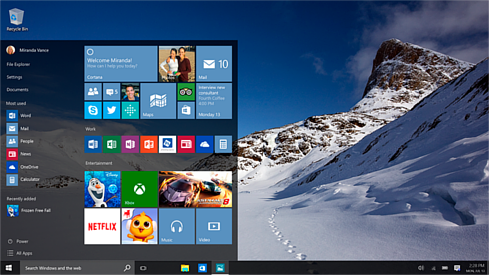 Windows 10 has arrived on desktop and tablet computers worldwide, and judging by the tech website reviews it appears to be a hit, with the free upgrade getting the balance right between traditional desktop users while providing additional benefits to touch-screen users. Windows 10 includes a number of accessibility improvements and it took a week to work my way through the various features, looking at both the new and familiar features of Windows accessibility.

One of the biggest complaints about the Windows operating system has been its slow and ageing web browser, Internet Explorer (IE). While it’s still possible to get to legacy IE support in Windows 10, the browser has essentially been replaced with Microsoft Edge, which is designed to be more standards-compliant. While developers will rejoice at the death of IE, the fact that Edge uses a different way to display web pages means that many assistive technology products such as screen readers may not be immediately compatible. For example, NV Access has warned that NVDA may have difficulties until the next update is released with Edge. Windows 10 still supports the ability to install other web browsers, so users eager to give Windows 10 a go can still do so, but it may be worth installing a browser such as Mozilla Firefox for web browsing until the assistive technology compatibilities are addressed.

That said, if the built-in Narrator screen reader provides enough functionality for your needs, this appeared to work well in the hands-on tests that were performed, doing basic webpage navigation and getting Narrator to read out whole webpages. Testing on both a Surface Pro 3 running Windows 10 Pro and the less-powerful Surface 3 running Windows 10 Home, Narrator was a little sluggish on the Surface 3 at times but still read out the content effectively.

Arguably the most promising new feature of Windows 10 likely to assist people with disabilities is Cortana, the digital assistant. People familiar with Siri on Apple mobile products will already have an understanding of how this works – basically you talk to your computer and a friendly voice will try to help you. Note that for Australian users, at this point in time Cortana is not available with the Australian language pack, but you can work around this by changing your Region settings to ‘United Kingdom’ and adding ‘English (United Kingdom)’ as a language. Microsoft has indicated that Cortana will be released in other regions soon, so hopefully this will only be a temporary workaround.

Cortana provides you with a number of options for training, whereby you can either leave Cortana on its ‘optimise for everyone’ option or specifically train it to be ‘optimised for me’. If you choose the latter, you will be asked six phrases to repeat so that Cortana can recognise your voice. Once up and running, you can ask Cortana to do a number of things for you such as tell you what the weather is, find out the time somewhere in the world, ask for a map to show you directions to a place or do web searches.

Once I started up Cortana, I found it fairly easy to use, but as with digital assistants generally, there is also a frustration when it doesn’t recognise what you’re asking or doesn’t respond in the way you expect. I had a fair degree of success in using the “Hey Cortana” statement to get it to recognise I was speaking to it, and when I asked for things like “What is the time in Perth?” it was able to tell me. It also responded well to “What is the weather in Sydney?” and “Where am I?”, at which point it provided me with an address fairly close to my house, which was a little bit eerie. Asking it to take me to a suburb nearby resulted in a map being displayed and a path, which was pretty impressive.

However, as users of Siri will understand, every success is met with three attempts which didn’t work, or it just gave up trying to give you a specific answer and just did a web search. Sometimes it would be able to do one thing but not another. For example, I could ask it to open Narrator but couldn’t get it to close it for me. It’s also not hooked into Outlook yet so when I asked it “What do I have on tomorrow?” it couldn’t give me an answer from my Outlook calendar, but it seems to be a good start. When you ask Cortana how old it is, it replies, “I’m just in my infancy”, which sums it up well. It’s also worth asking Cortana “Who is Siri?”, to which you get a great response.

For people considering upgrading to Windows 10 from Windows 7 and 8.1, you won’t notice too much of a difference in the Ease of Access section. Narrator, Magnifier, the on-screen keyboard and high contrast options still remain along with various options to optimise based on a particular disability. However, users upgrading from Windows 7 will discover that the accessibility features have improved a lot, with Narrator now being a reasonably functioning screen reader and Magnifier now being compatible with the High Contrast colour themes. Windows 8.x users will notice less change, although minor tweaks have been done to improve the functionality of the tools around the new user interface and, as discussed previously, Narrator has been optimised to work with the new Edge web browser.

Although Windows 8.x saw significant improvements in accessibility features over Windows 7, many people with disabilities were hesitant to upgrade due to the new and often confusing tablet interface which worked very differently to previous versions of Windows. Microsoft has addressed this in Windows 10 by allowing you to switch between the desktop interface and ‘tablet mode’. By default, Windows 10 looks and feels a lot like Windows 7 with the familiar start button, the ‘bubble’ list of popular things you like to do and a really easy way to search for things both on your computer and online. One issue that some vision impaired users might have initially is that the icons in the taskbar are smaller than in previous versions of Windows, but using the Magnifier you can zoom these up. Something that I found very handy is that all the notifications such as whether or not wifi, Bluetooth and other settings are turned on or off are in one ‘notifications’ area with big buttons to select, and there’s also a ‘brightness’ button which allows you to quickly make the screen brighter, which saves a lot of time hunting around for that setting. Tablet users will find tablet mode similar to Windows 8.1 in making everything a bit more tile-like, and the touch-screen support for Narrator and Magnifier in particular are very handy in this mode, although they both still work fine with a keyboard as well.

Is it worth the upgrade?

To answer the question “Is it worth the upgrade?”, I would say absolutely yes, but only if your assistive technology provider has indicated that the software you use is compatible. Windows 7 users will get a very pleasant surprise in the significant improvements to well-known accessibity features such as Narrator and Magnifier, along with predictive text in the on-screen keyboard, while Windows 8.x users will find the ability to toggle between a Windows 7-esque interface and a tablet interface, a welcome return. While people with mobility and vision impairments are likely to benefit from Cortana in the long run, it’s only just getting started and should be viewed as a fun toy for now, but it could be a serious accessibility tool in the future. Best of all, the upgrade is free for the next 12 months, so assuming your AT works okay with it, I’d definitely recommend you take the plunge and try out Windows 10.