The Australian Communications and Media Authority (ACMA) held a day-long event in September dedicated to live captioning issues as part of its Citizen Conversation Series. 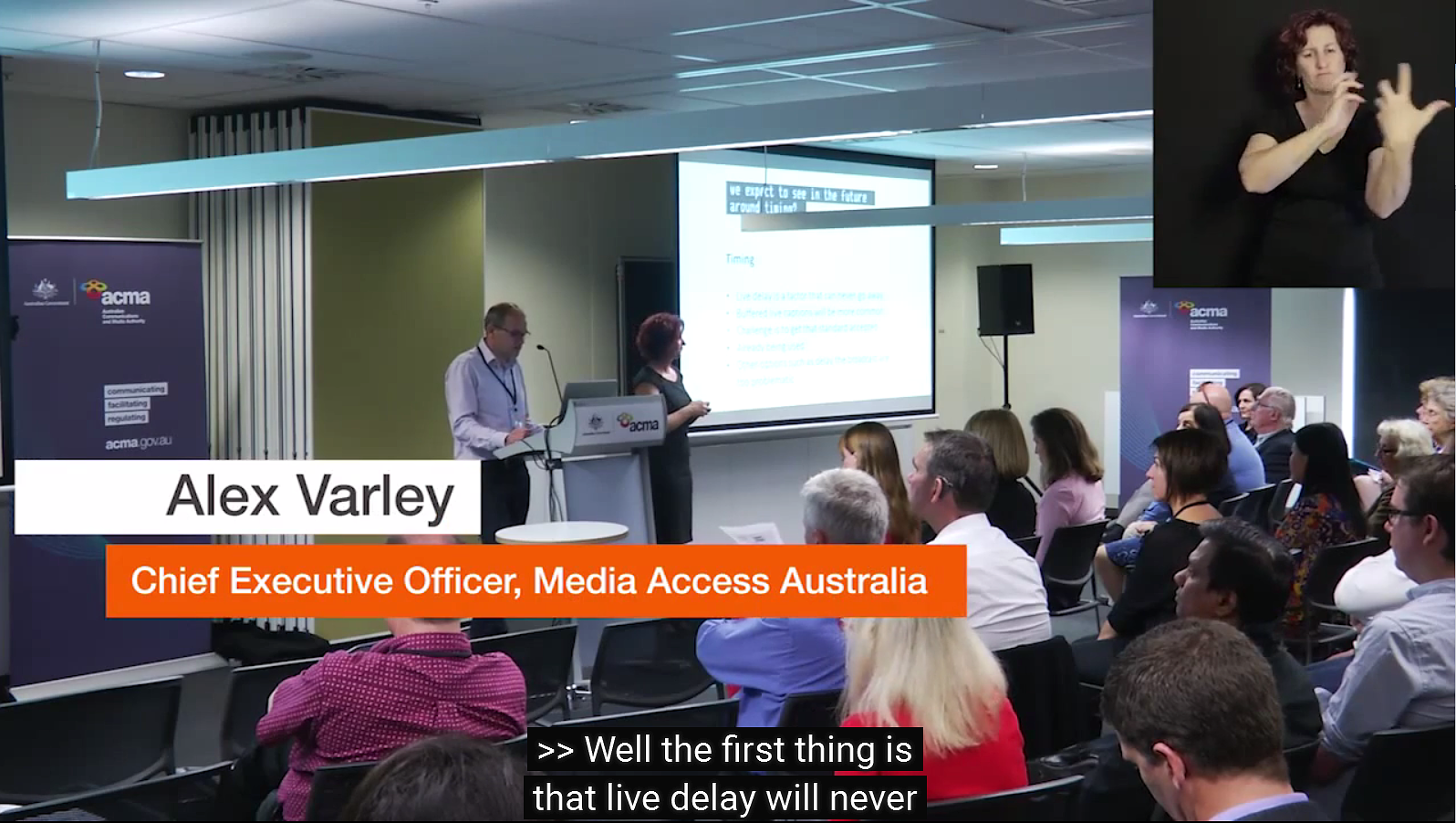 Eighty people attended the live captioning event and were a mix of broadcasters, caption suppliers, government and advocates. The presentations were designed to show the range of issues that impact on live captioning and its quality, as well as getting perspectives from caption consumers.

Wendy Youens and Stephanie Turner from Able NZ gave the first international perspectives highlighting that live captioning means that a lot of choices had to be made on the fly, and the skill of the captioners is to capture what is being said and trying to summarise complex talk shows where providing verbatim captioning is impossible.

This was followed up by Diana Sanchez from Ericsson Broadcasting Media Services who covered the different approaches in five European markets, including the Netherlands where the broadcast is delayed to allow synchronous captions on “live” programs and Germany where some of the sports broadcasters are trained to provide the captions via speech recognition software.

Paul Richardson from the Seven Network in Australia covered the challenges of live program captioning and noted that quality standards such as how the captions appear on the screen can be affected by the device that the viewer uses. He also reminded everybody that with live television things can go wrong and that includes with the captioning, but his team and the captioners do everything that they can to deliver a good service.

Independent consultant Robert Scott looked at news captioning using the “hybrid” method (a mix of scrolling and prepared captions) and highlighted the benefits and pitfalls of mixing delivery methods in the same broadcast.

Ai Media’s Tony Abrahams outlined the NER quality measurement system for live captioning which his organisation has adopted and one that is growing in popularity across the world. Its key feature is identifying significant errors from minor irritations that don’t necessarily affect the overall comprehension of the broadcast.

Jing Han from SBS reviewed the decision making process from a broadcaster that also supplies captioning services itself and her presentation included a call for better sharing of information and resources worldwide.

The final session was a speculative, informed view of the future of live captioning by Media Access Australia’s CEO, Alex Varley. He reassured the industry that technology was not going to remove their jobs, but help remove some of the more mundane tasks, suggesting that commercial benefits from making content more accessible would help spread the use of captioning further.

Transcripts, copies of the presentation and a captioned and signed video of the highlights have been compiled by the ACMA.