The annual International Consumer Electronics Show (CES), which was held in Las Vegas, USA last week, is generally considered the world’s largest showcase of consumer electronics. With products ranging from futuristic prototypes through to things we’ll see in stores soon, it’s a good opportunity to see what some of the accessibility implications are for 2016. 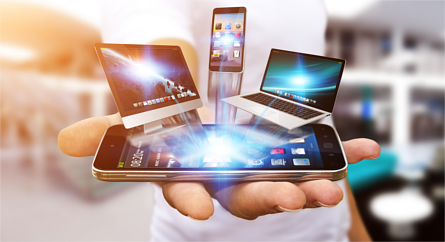 The general trends for TVs this year are for them to be bigger, brighter and smarter, which is likely to assist people with a vision impairment. Major manufacturers such as LG, Samsung and Sony all showcased TVs that are much thinner than usual and brighter due to the use of the OLED technology, replacing the current LED-LCD that can be found in most popular televisions at the moment. The move to OLED allows for thinner and brighter TVs, and has led to some interesting prototypes. Examples include LG’s 18-inch TV which is so thin it can be rolled up, and at the other end of the scale Samsung’s 170-inch TV which comes as a number of smaller displays that can be joined together like Lego to form the bigger picture.

While OLED has been showcased on large television before and is currently available as a screen technology on smaller displays, it has more mainstream applications this year, and a lower price point is likely to make it more of an option for general consumers. OLED provides much better brightness and clarity than current TVs, which is likely to assist people who have low vision, and Samsung’s Lego-like TV could conceivably allow a user with low vision to create a display to whatever size they need by simply connecting the displays together.

Many TVs such as Sony’s new range are including Google Android to enable their online features, which offers the added benefit of potentially supporting Android’s accessibility features. This could potentially allow the Talkback screen reader to be used for more effective navigation of streaming content, or captions to be globally implemented across both streaming media apps and live television.

Computers are also making the move to OLED screens with Lenovo highlighting a laptop with an OLED display. While there were a number of smartphones on display, most attention was on the various fitness devices which have moved into the smartwatch category such as the Fitbit Blaze. While some smartwatches and evolved fitness products run on the Android Wear platform that has some limited accessibility features, most do not, so it is unlikely that most of the new fitness products will contain accessibility features to the standard of a mobile or tablet.

As with last year’s CES there are more connected home devices, including Samsung’s fridge that has a large touchscreen interface with apps to order groceries and watch internet content, an LG refrigerator which can make the door translucent so you can see what’s inside it and a sensor you can knock to open it hands-free. While the Samsung fridge is likely to be challenging for many people with disabilities given the likely inaccessible propriety touchscreen interface, the LG model may be very useful for people with a mobility impairment. There was also an assortment of smart home features to open doors, turn on lights and other household elements using an app on a smartphone or tablet which can be very useful if using an accessible device to drive it all.

With recent attention for people with vision or mobility impairments on the prospect of driverless cars to help with getting around, there now appears to be an alternate solution – using a drone where the package being delivered is you. The Ehang 184 drone can have an address inputted prior to departure with the automated drone then delivering the person to the address without input from the person inside. While unlikely to be commercially available for some time, with issues relating to flying regulations in most countries, it does raise an interesting possibility for people who cannot currently drive to take their personal drone to work or to the shops without needing roads at all.

One particular highlight of disability-specific products at CES is the Jacoti Hearing Suite, a set of cloud-enabled mobile apps that claims to grant anyone ubiquitous hearing support with reliability. The app suite includes Jacoti Hearing Center, Jacoti ListenApp, Jacoti Lola Classroom and myJacoti. The company was an innovation award honoree for the product.

Additional information on accessible consumer devices can be found in the Digital technology section of the Media Access Australia website.