For most people, great ideas are triggered by an event or experience that pushes them to do something. For Sydney industrial designer Euan Ramsey-Stewart, it was getting kicked out of art galleries, writes Clarizza Fernandez.

"I used to get kicked out of art galleries because I would go up and touch sculptures. I thought 'What if I couldn't see the damn thing?' I'd at least want to know what it felt like."

But this, he says, is what started his decade-long journey finding a way to help improve the mobility of the blind and vision impaired. These days, Ramsey-Stewart is working with a group of researchers at the University of New South Wales on a project called Simplified Information Mobility and Orientation (SIMO). Later this year, the team will be releasing their app for Android devices – an app that will enable blind and vision impaired users to receive navigational information on their smartphone or tablet for indoor spaces such as shopping centres and museums.

"SIMO is all about providing information in a usable format to go from point A to point B fearlessly – if they are blind or vision impaired – in an indoor environment," said Ramsey-Stewart. 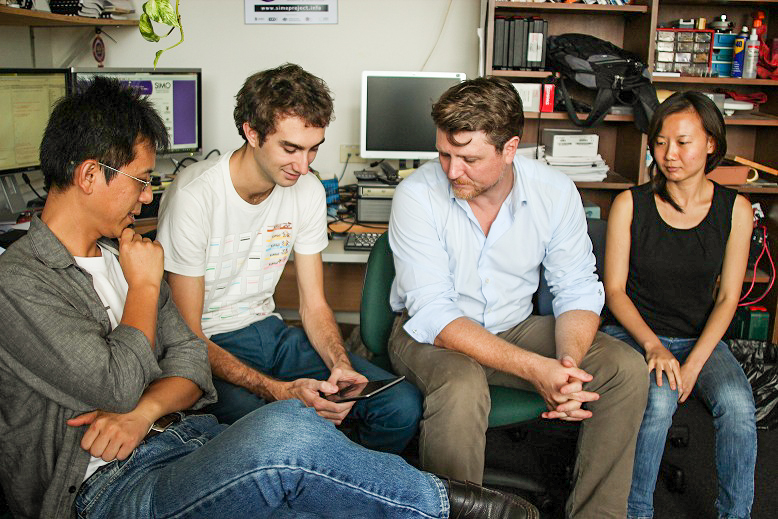 The technology being used in SIMO's app is called ‘indoor mapping’, or sometimes ‘indoor GPS’. But while GPS uses satellite information to map the outdoors, indoor mapping relies on Wifi access points. When combined with a smart device, Wifi technology can track a person's location to within a certain range. This is where their app steps in – in places under cover, where satellite signals often can't reach.

Diagnosed with Keratoconus in 1996, a condition that results in blurred vision due to the thinning of the cornea, Ramsey-Stewart is familiar with the challenge of not being able to confidently find your way indoors. "The biggest problem with a blind or vision impaired person is that without having that knowledge of where they are, they won't explore. There's very few that will explore for themselves. What we're trying to do is give them a little mate on their shoulder and that's called SIMO."

Ramsey-Stewart first came up with the idea to explore navigational technologies for the blind and vision impaired during his time as an Industrial Design undergraduate at UNSW. For his graduation project, he created a prototype for a tactile handheld device that was designed as an aid to be used with a cane or a guide dog. This device was also the basis for SIMO's app. He says at the time (2006), technologies associated with navigation such as Bluetooth and GPS were only beginning to become available on mobiles.

When Apple released the iPhone in 2007, he says the game changed. "Initially it was designed as a stand-alone product in 2006, with sensors built in. With the introduction of the iPhone, we moved into the smartphone area as it became evident that this platform would be suitable and more financially feasible for us."

Today, GPS and Bluetooth technology is readily available on smartphones and tablets. And the technology has improved as the accessibility software of smartphones and tablets improves. One example is the turn-by-turn navigation feature found on many GPS apps including Apple Maps. This feature works with Apple's screen reader called VoiceOver and combines GPS navigation instructions with audible feedback.

Ramsey-Stewart says indoor mapping is already moving into the mainstream arena, citing Google as a major corporation to invest in the technology. In November 2011, Google launched an indoor maps service as part of its hugely popular Google Maps app, and last month, the service was rolled out in Australia. Last year, an upgrade to the app saw the addition of walking directions on Google Maps Indoors. Apple too has shown it's on their radar; this month they acquired indoor GPS company WiFiSLAM.

While the technology presents many commercial benefits as shown by Google and Apple, Ramsey-Stewart maintains that the driving motivation behind their app is the needs of the blind and vision impaired people; which is clearly indicated by the simple design of the app's interface. However he is quick to highlight that it is a piece of technology that will benefit many more people and can be applied to a variety of industries.

One of the things the SIMO team want to achieve with their app is to help join the dots about where a specific place is in relation to a place they are familiar with. For example, if a user knows where the building entrance is, they can retrieve information using the app about where their favourite coffee shop is in relation to it. "What I discovered was not everyone is 100 per cent totally blind, only two-three per cent are. And the rest have some sort of residual vision as well as visual memory," Ramsey-Stewart explains.

He says the app will help to build up a picture of where things are by providing the location of specific points of interest such as public toilets, stairways, lifts, entries and fire exits. The challenge is how to present directions to a person who is blind or vision impaired – particularly when the requirements of this group are vast and varied.

To solve this, the SIMO team came up with a simple interface. "We have built into SIMO the use of a setting system that takes into account such things as colour contrast, the person themselves, the environment they are walking in, the height and speed that they walk. This is because every person is an individual and we want to accommodate that," he says.

The app's interface consists of a large arrow that points to the direction of the specified point of interest and the estimated number of paces required to reach the destination. Unlike GPS apps that provide distance estimates in metres and kilometres, the app estimates the number of paces to show the distance. Paces are based on the person's height. The app also vibrates to indicate an upcoming turn. If the screen reader is turned on, this information can also be sent to the user through speech output.

Another challenge the SIMO team identified was getting floor plans for buildings. Floor plans are a vital component required for the app to work. They rely on council and building owners and businesses to provide the floor plans of public places. In some instances, not all information about the rooms inside a building will be available. But the team hopes this is something that can be improved through time. One way they have ensured this is through the 'explore mode', a feature on the app that uses crowd sourcing to gain information about rooms inside a building.

Ramsey-Stewart explains that the 'explore mode' will allow users to record their own notes about a specific point of interest if the information is not available. Their notes can then be uploaded to the service and shared with other users to build a database of crowd-sourced indoor mapping information.

Having tested the app with the blind and vision impaired community through organisations such as Vision Australia and Guide Dogs Australia, the team have received positive feedback for their app and continue to receive support from the community.

Ramsey-Stewart is the first to admit the road to the development of the app hasn't been easy, but the team remain focused on their goal. "It's fair to admit we have had setbacks with key researchers leaving the university but we have overcome those challenges and maintained our deadlines. The team is the best in Australia, if not the world."