Behind the scenes: audio description at the theatre

Deprecated function: Array and string offset access syntax with curly braces is deprecated in include_once() (line 14 of /home/mediacc/public_html/themes/engines/phptemplate/phptemplate.engine).
Monday, 21 May 2012 09:35am

For something different, Media Access Australia’s Eliza Cussen takes readers behind the scenes at one of Sydney’s most beloved theatres to reveal how audio description has become a vital part of what they do.

There’s a term kids learn in Year 9 Drama: mise en scéne, or ‘everything but the script.’ It’s used to help set the atmosphere of a performance, the light, the costume, the set design, the acting. It reminds everyone working on a play that the script is only the skeleton, on to which must be placed muscle, skin and clothes. For most theatre goers it is these elements which carry much of the play’s meaning, but if you’re blind or vision impaired, this meaning can be lost.

Audio description fixes that. Bruce Cutler, a Vision Australia volunteer, is a highly skilled describer.  A Director of the Board of the National Institute of Dramatic Art, he knows his way around the stage.  From a one-square-foot hatch next to the sound booth, Cutler selects which elements of the mise en scéne, add meaning to the dialogue and communicates them via headphones to patrons with vision impairment.

“I think that my skills are an ability to see the action of a play, to describe succinctly the action or without taking over the dialogue interpreting in any way,” said Cutler. “Our principle is ‘say what you see and do not interpret’. Our clients may be visually impaired but they are not stupid.”

Describing a play takes preparation. Cutler will see the performance once from the audience’s point of view, then another two times from the sound booth to understand the breaks in dialogue, the movement of the actors and what details are necessary to describe. He’ll write detailed notes, but not a script. One of the joys of theatre is its spontaneity and describers have to be prepared for that.

Dialogue alone can be highly subjective, said Cutler. “If a character says ‘this is my mother’, that sentence could be subject to different interpretations. Did the mother enter the room, was she there the whole time, or did that character pick up a photo of the mother from the desk?”

Some plays are more challenging than others. Plays reliant on physicality can make describers work hard, whereas talk-fests can make it difficult to place description in the gaps between pieces of dialogue. But according to theatre producers, people will attend a play no matter how visual the performance may be.

Vision Australia works hard to make the process simple for theatres. They supply all the equipment so that all theatres have to do is accommodate the volunteers and make sure patrons can take advantage of the service.

The Ensemble Theatre is one such venue. Located on the Sydney Harbour waterfront, it is a shining example of a theatre catering to people with a disability. They’ve been offering audio description for over 10 years and creative directors Sandra Bates and Mark Kilmurry are advocates for theatre which is progressive and inclusive.

The Ensemble provides three to five audio described sessions for each play. Importantly, these sessions are spread across matinees, evenings and weekends, giving blind and vision impaired patrons more freedom of choice.

“We were approached and we thought it was a terrific idea and we should do it,” said Kilmurry. “Anything that can help in that way is a great thing to do.” 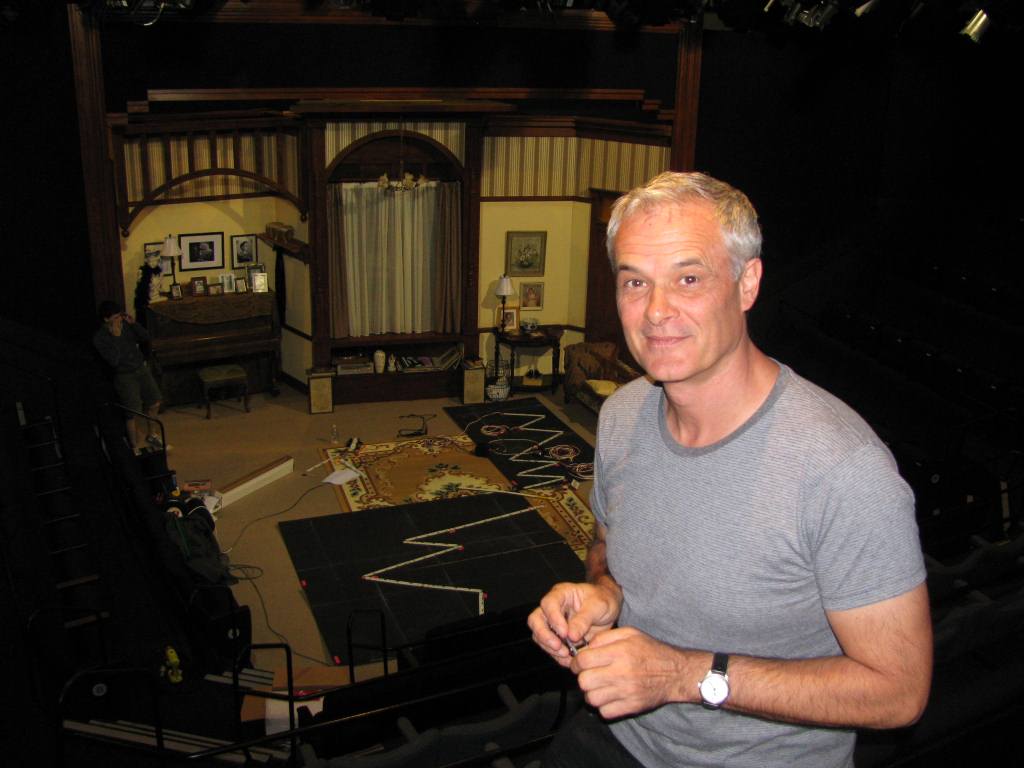 Not every creative director feels this way. Some can be protective of their work, scared that audio description will in some way detract from the experience for the rest of the audience. Kilmurry urges other creative directors to experience audio described theatre, come to understand the process and take it back to their own venues.

“I don’t see why there’d ever be a problem with it,” he said. “We’ll gladly open up to other performances if that’s required.

“I hope that it continues and is not tokenistic thing. It needs to be at a prime time. It’s not disturbing anyone in the auditorium. As far as I know, nobody notices. It’s just a great, vital thing to do.”

Kilmurry just gets it. As he showed me around the auditorium, conversation drifted to theatre captioning. I mentioned an app that displays theatre captions on an iPhone. His eyes lit up as though he had just decided what he wants for Christmas. He then furrowed his brow, already thinking about how he could make it happen.

In Australia, audio description is available on DVDs, cinema and a small number of arts events.